Get the full story on the future of antipsychotic prescriptions

Recent updates from the Centers for Medicare & Medicaid
Services seek to ease skilled nursing rules related to antipsychotic drugs. Implemented back in 2017, Phase 2 legislation limited prescription supplies to under 2 weeks (14 days) unless a physician conducted an in-person exam. The ruling is considered a big win for affected facilities.

PRN prescriptions, also known as ‘as needed’ medicines, are a rare but important part of long-term care. With the current examination requirement posing a difficulty with compliance, staff are inclined to write longer (unnecessary) scripts. The practice has led to intentional and unintentional misuse of antipsychotics. 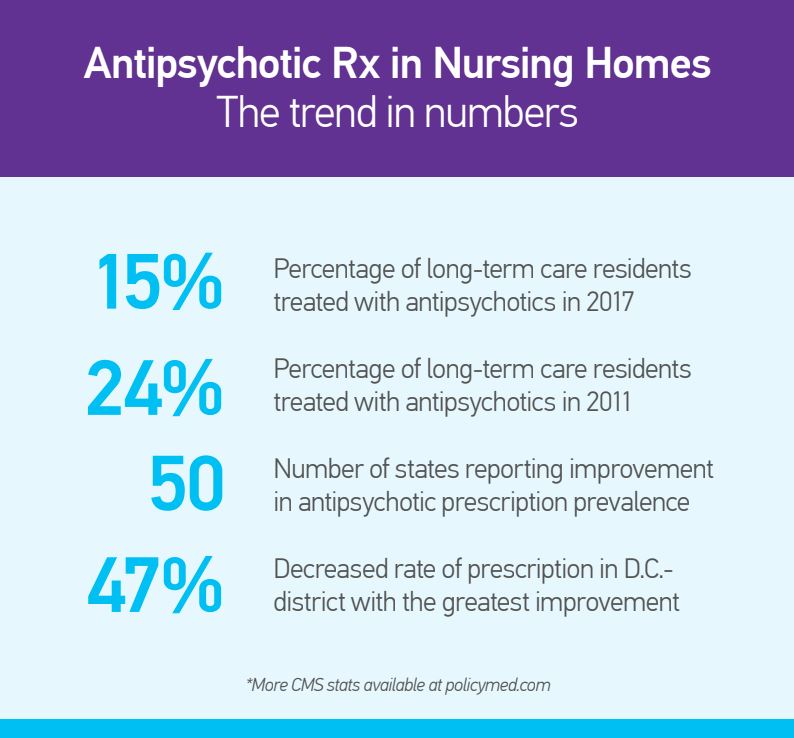 For the past few years, providers have grappled with the decision to administer PRN antipsychotic prescriptions due to unavailability of doctors, especially in rural and suburban areas short on resources. Critics also cite the general uncertainty surrounding current antipsychotic regulation, which ultimately puts patients at risk.

The old ruling “had the potential to delay important medications while facility staff struggle to get a resident seen by a physician,” says Amy Stewart, MSN, RN and VP of Curriculum Development at the American Association of Post-Acute Care Nursing. “The regulations around this have [also] been confusing because it was different for psychotropics than it was for antipsychotics.”

CMS has finally caught on to the problem. The new proposal allows prescribers to treat residents with antipsychotics past the 2-week mark, so long as they document their reasoning as part of official health records. Most industry professionals approve of the decision, as physicians are better equipped to handle psychotic episodes before resorting to more permanent prescription solutions.

While the need for ‘pro ne rata’ in nursing homes is relatively infrequent, loosening of the current directive will surely benefit operators moving forward.