Get all the details on Australia’s FluCARE automation

From November of 2018 to April of 2019, the United States experienced its longest flu season in a decade. With two
debilitating strains and an estimated 80,000 deaths, containing the seasonal virus was beyond difficult. But in coming years, researchers hope new outbreak tracking technology could curb preventable hospitalizations (and deaths).

Starting in the fall, Australian facilities will pilot the FluCARE application, which analyzes patient data and alerts staff when swiﬅ spread of the disease is imminent. Skilled nursing operators already know that the 65+ population is most vulnerable to influenza. 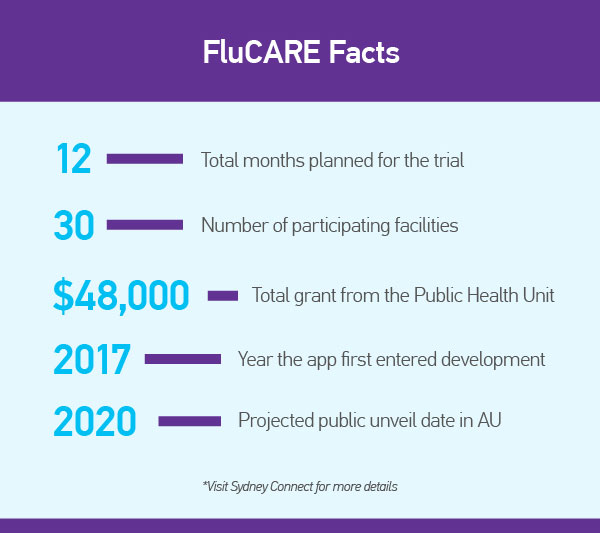 Just last week, the Centers for Disease Control and Prevention announced a delay for this season’s vaccine due to last-minute changes in formulation. The 70 million affected doses represent 40% of the American vaccine market. Better late than never, but administrators wonder: Are there other ways to control outbreak among residents?

The FluCARE pilot program shows great promise. According to IT News (Australia), the app’s “algorithm continually analyzes the data as it comes in, automatically triggering alerts when the criteria for an outbreak is reached. As an alert could come in any time of the day or night, nursing home staff will receive an action checklist to guide them through the immediate responses that should be taken.”

Doctors say the app will help minimize the spread of the disease by empowering facility workers to act sooner. Thanks to FluCARE automation, coordination and containment in response to outbreak will be quicker and much more efficient.

They’re also excited about the technology’s possibilities for the future. Engineers can not only adapt the program to other public health concerns; they also plan to spread FluCARE and all of its amazing advantages to affected countries the world over.

To our cautious partners, SpecialtyRx asks: Are you ready to weather this season’s influenza storm? Stay tuned, as we’ll be closely tracking the results of the trial.