Back in 2016, a long-standing law in California was deemed unconstitutional. The legislation allowed skilled nursing facilities to make important decisions for patients at the end of life. In particular, the law—established in 1992—concerned individuals described as ‘unbefriended,’ meaning they are without family, friends or other legal surrogates.

Since then, physicians’ rights have hung in the balance as appeals courts battled over the ruling. Industry advocates fought staunchly to preserve providers’ ability to intervene, including the prescription of critical antipsychotic medication. Now, the verdict is finally in: Representatives say the 1992 California law will remain, so long as nursing home residents’ rights are thoroughly respected.

The announcement puts the topic of elder orphans back into the spotlight, sparking passionate debate among senior advocates, facility owners and lawmakers. 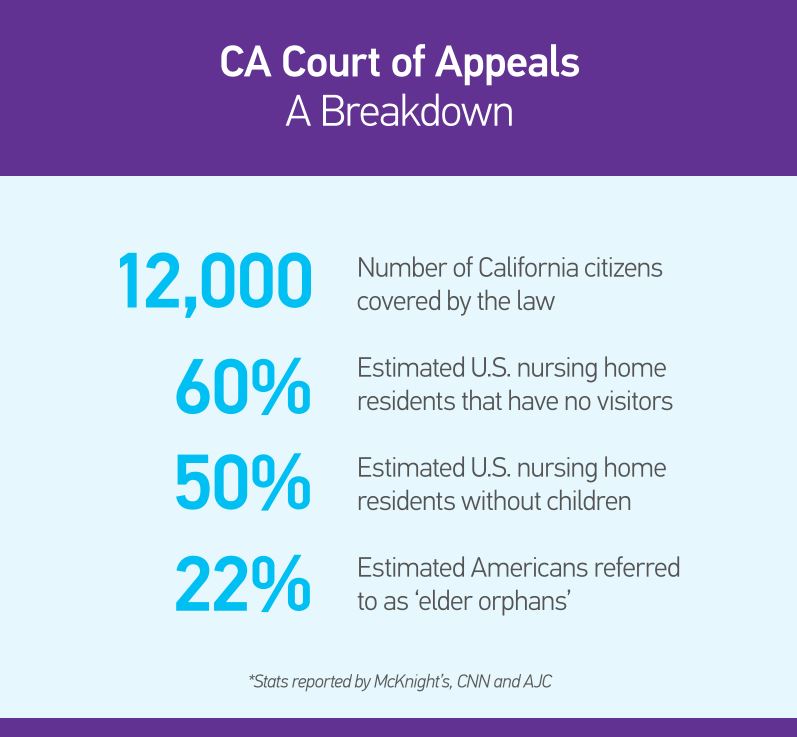 A win for ‘solo agers’

In wake of the ruling, facilities breathed a huge sigh of relief. For the past few years, prominent media sources, including Kaiser Health News, have reported on the growing problem of ‘solo agers,’ also known as ‘elder orphans.’ These individuals may be divorced, unmarried, widowed, childless or otherwise without close family and friends to provide emotional, physical and financial support.

As more and more Baby Boomers reach geriatric age, nursing homes have kept the issue on their radar. When a patient loses the capacity to make decisions, consultation with family is crucial; without them, the individual is powerless. But in places like California, doctors have the right to step in—just with a few small caveats.

“This ruling means an interdisciplinary team of caregivers will continue to be able to formulate and implement care plans,” says Craig Cornett, CEO of the California Association of Health Facilities. “We are gratified that the court has brought clarity to this important issue so our members can continue to ensure the wellbeing of residents.”

To exercise their rights, doctors must involve an independent representative for the patient. They will also have to document their decision to intervene and present the information both orally and in writing.