For years, Medicaid reimbursements have refused to keep pace with living wage demands. Nursing home caregivers across the country average just $12.84 an hour, which hovers just above the minimum wage in most states. As of August 2019, New York’s price floor is fixed at $11.10 per hour, while New Jersey employers must shell out $8.85.

Although many states plan to phase up to a flat $15 rate over a set period, aggressive advocates have a faster timeline in mind. Founded in 2014, the organization known as 15 Now has spread like wildfire with chapters throughout the U.S. Their goal is simple: secure a dignified life for all workers by fighting for a mandatory $15 minimum wage.

As politicians chime in ahead of the 2020 election, the plight of long-term care workers has become a popular point of contention. 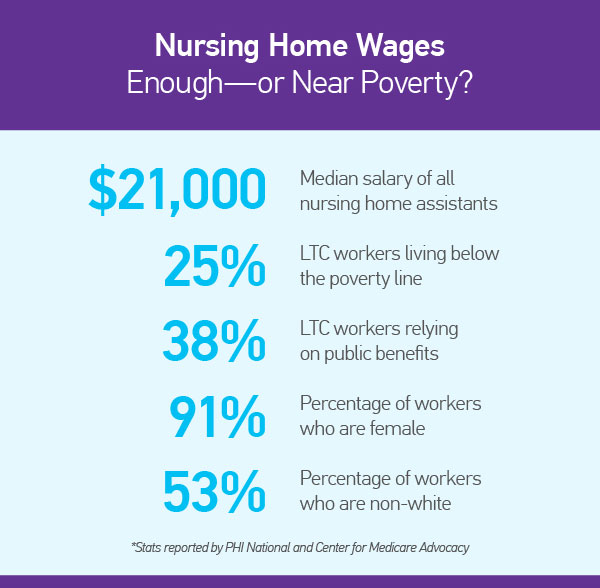 For a group of workers delivering care to 1.5 million people, these statistics are alarming—but sadly, not surprising. Many facilities have been forced to close due to staff shortages, which are inevitably tied to low wages. According to industry experts, Medicaid reimbursements sometimes lag as many as 42 months behind the cost of care.

Unable to provide a competitive wage, facilities cite ongoing problems with recruitment, turnover, and quality of resident care. Shists are reduced to barebones staffing requirements as operators struggle to stay afloat. So while 15 Now protestors may have positive intentions, LTC is still subject to the whims of Washington.

Until regulation loosens and reimbursements become proportionate with cost of care (and minimum wage requirements), workers and patients will continue to suffer. Of course, LTC providers also report some of the slimmest profit margins in decades.

“Too osten, it is not the providers denying those caregivers their living wage dreams—it is policymakers,” says Brendan Williams, CEO of the New Hampshire Health Care Association. “Even policymakers trumpeting ’15 Now!’ or purporting to favor gender wage equity are content with a long-term care system where Medicaid reimbursement depresses wages for nursing assistants.”

As always, SpecialtyRx supports your progress, including in the areas of staffing and payroll. We encourage our partners to become their own advocates. Strive to educate the public—including progressive legislators—about the healthcare industry’s particular wage challenges. By continuing the conversation, a solution may finally be within reach.