If passed, a new federal bill (H.R. 1309) will require healthcare facilities to adopt plans for protecting employees against workplace violence. Spearheaded by Representative Joe Courtney [D – CT], the legislation seeks to improve conditions for America’s most vulnerable workers. The Bureau of Labor Statistics reports that social workers and healthcare providers are a staggering 5X more likely to be injured due to violence. 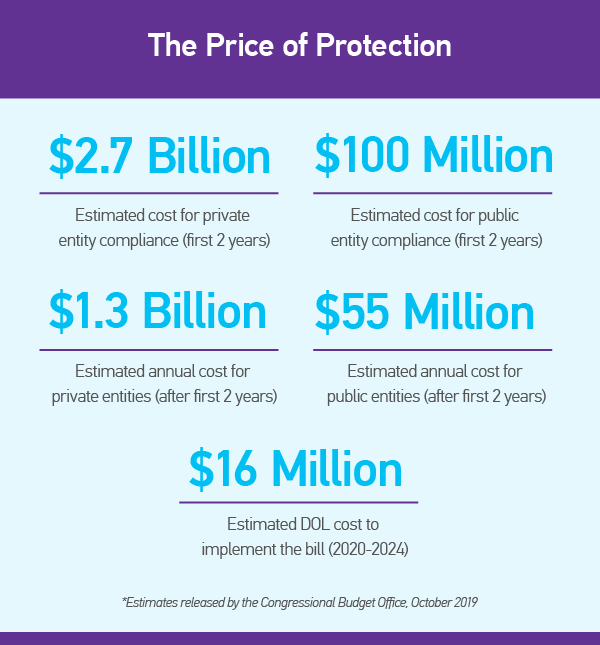 To meet the law’s proposed standards, nursing homes, hospitals, walk-in emergency clinics and similar private facilities will be forced to spend an estimated $2.7 billion over the first two years; once plans are in place, the Congressional Budget Office projects an annual collective cost of $1.3 billion. In the public sector, facilities will pay roughly $100 million over the first two years and $55 million thereaﬅer.

In order to participate in Medicare, employers will have to demonstrate compliance with the bill’s various mandates. While many of these requirements are widely implemented throughout the healthcare industry (mostly due to individual state law), others pose financial stress to facilities’ already tight budgets. H.R. 1309’s mandates include:

CBO researchers say hundreds of thousands of private facilities will be affected. And while total projected costs seem daunting, the burden for small operations will be light compared to larger hospitals.

“Most of the covered entities are small facilities that would incur costs related to developing plans and training employees,” says the CBO report. “Costs to those facilities would constitute about one-third of the mandate cost overall but would be relatively small for each facility. [Hospitals] would incur significant and uncertain costs because of the possibility of more frequent incidents and the likelihood of infrastructure changes.”

If the bill passes, OSHA will issue a formal workplace violence prevention rule within 42 months. In the meantime, facilities should alert and educate staff about the legislation; brainstorm how to avoid (and handle) possible attacks; and discuss what they can expect in coming months in order to remain compliant.