How nursing homes banded together for the block

Patient advocates breathed a collective sigh of relief late Thursday, as the cuts were set to go into effect starting November 6th. The injunction is only temporary, but representatives now have time to sufficiently prove (before the court) that the new methodology will devastate facilities if swiﬅly implemented. 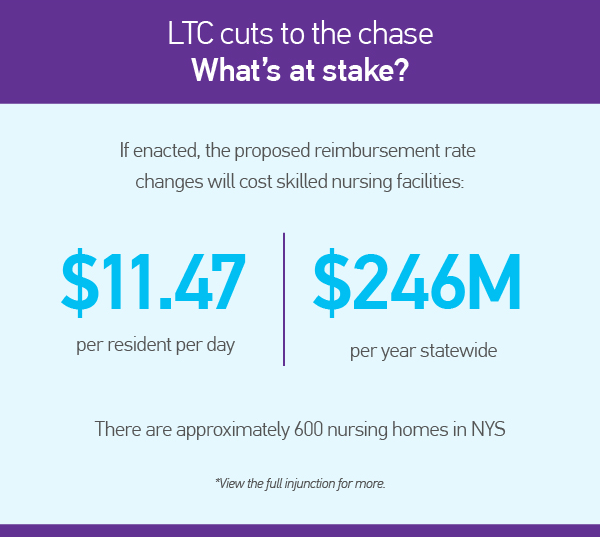 Aﬅer the DOH announced the cuts on October 9th, over 100 nursing homes and senior advocacy networks came together in a lawsuit against the state. Petitioner-plaintiffs include LeadingAge New York, the Greater New York Health Facilities Association, Continuing Care Leadership Coalition, Healthcare Association of New York State and many rehabilitation and nursing centers regionwide.

O’Connor’s decision to grant the preliminary injunction is based on their claim that the changes will cause irreparable harm to facilities and their residents. Administrators cited the reduction of staff, elimination of programs and services, their inability to meet creditor obligations, and in some cases, the threat of closure.

As lawyers scramble to prepare for the next stage of the process, industry representatives remain in high spirits. “We are gratified that our residents and employees will be protected while we establish that the new methodology violates state and federal law,” says James Clyne Jr., President of LeadingAge New York. “Patients, workers and nursing facilities were facing significant immediate harm.”