Secondary Fracture Prevention Could Save Billions

Here’s how osteoporotic fractures factor into the equation

In 2016, the World Congress on Osteoporosis, Osteoarthritis and Musculoskeletal Diseases released key findings on the rate of secondary fracture for first-time osteoporotic fracture patients. Aster initial fracture, the risk of re-fracture rose an additional 4% according to the person’s age; the risk was also 41% higher for women compared to men.

Of 5,039 patients who suffered a major fracture event, 1,919 individuals—about 38% of subjects—experienced a second fracture. The majority of cases occurred shortly aster the original injury, underscoring the importance of fast pharmacological treatment. Now, experts say better secondary fracture prevention could save Medicare $1.2+ billion dollars each year (and save patients a whole lot of pain in the process). 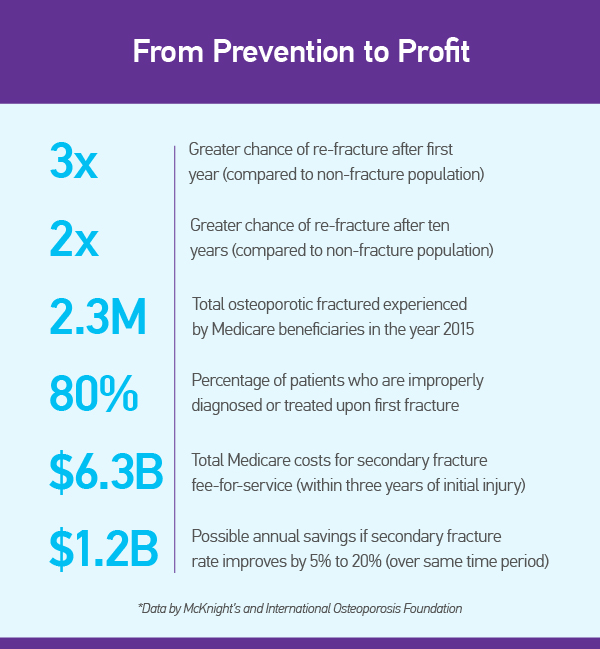 New research from the National Osteoporosis Foundation focuses on the need for stronger prevention programs across U.S. healthcare facilities. While nurses and clinicians have the tools and treatments necessary to help patients avoid secondary fracture, those measures are not being made a priority.

“Prevention efforts are a fraction of what they should be,” says Elizabeth Thompson, CEO at NOF. “In fact, only 9% of female beneficiaries were found to have been screened for osteoporosis within six months following an initial fracture.”

By accurately prescribing proven osteoporosis drugs, performing regular bone density tests and properly addressing the underlying cause of primary fractures, facilities can improve re-fracture rates by up to 50%. Proactive measures also have the potential to decrease the instance of hip and spine fracture by 70%.

So, how is your staff handling bone health? What actions might you take to prevent secondary fractures, thus saving Medicare billions? To start, pledge to help IOF Capture the Fracture®, an initiative that strives to cut fracture-related costs across the globe.