New data suggests life expectancy is on the rise

How long-term care factors into the mix

The National Center for Health Statistics released their latest findings on American mortality and other figures related to the 65+ age set. Not only are men and women living longer; they are also more likely to seek long-term care services. 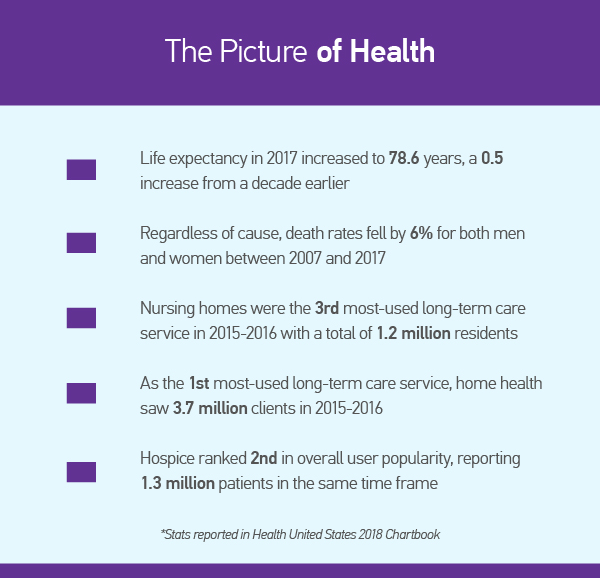 With more Americans living longer into their golden years, facilities can expect healthy numbers over the next few decades, although competition is always a factor. Also, health trends suggest an increased need for long-term care, as instances of life-threatening disease show no signs of slowing.

Comparing 1999-2000 and 2015-2016, the study revealed near identical numbers for adult hypertension. Obesity is on rise, as is diabetes with a 14.7% increase for men and women over the age of 20 (also the 7th leading cause of death in America). Despite increased awareness and advancements in treatment, these chronic illnesses remain a concern.

Researchers also list the top causes of death across all age categories: heart disease, cancer, accident, chronic lower respiratory disease, stroke, Alzheimer’s and diabetes. Many of these are prevalent in the care setting and demand quality health care access for proper management and potential recovery. Also, the number of Americans taking 5 or more prescription drugs rose by 4.5% between 1999-2000 and 2015-2016, settling at 11%.

With death rates down and use of nursing homes up 4%, facilities will continue to battle diseases that threaten quality and expectancy of life into the 2020s. As always, SpecialtyRx supports your journey with consistent, cost-effective dispensary solutions.